The Geek Contextualization: Engaging the Geeks

North American culture has so many subcultures and dynamic influences that it’s hard to keep up. It’s even harder to engage these cultures with the gospel. But we need to find a place to start. For me, that starting point is the growing Geek culture. It can be your starting point, too.

In a recent post (The Geek Contextualization: Putting the Gospel Where the Geeks Are), I provided a basic outline of how we as the gathered church can approach the scattered of this specific culture:

Next (The Geek Contextualization: Finding the Geeks), we discussed how we can find where this culture is and how we can approach the culture both inside and outside the church.  This leads us to today’s discussion on some of the issues we should consider when beginning to engage and apply the gospel message to this unique culture:

Step 2: Contextualize and Engage.
Many pastors and church leaders understand that we must adjust how we communicate the gospel in international missions (contextualization). What if we were to apply the same principles in communicating the gospel to people groups right in front of us? For our purposes, what if we put the gospel where the Geeks are?

In international missions we typically use the term contextualization to refer to the application of the gospel to groups of people in their own and native terms. In his book Center Church, Timothy Keller describes contextualization this way: “Proper contextualization is the act of bringing sound biblical doctrine all the way…by re-expressing it in terms coherent to a particular culture.” We suggest a similar approach in reaching out to the Geek community.

So how then are we to engage and provide a gospel message that is genuine, biblical and yet coherent to the Geek culture?  We must consider the following:

That said, the Geek culture’s language barrier is less about learning an entirely new language and more about understanding vocabulary and slang. (However, don’t be surprised if you meet someone who has mastered Latin, Klingon, Dothraki or even Elven.)

Thankfully, you can learn the Geek culture’s language. To this end, you can become a student of the culture in order to appreciate the language and what it means to those who call themselves members of the Geek collective. Once you learn the language, you can then understand how to apply the gospel message to that culture.

Like any other culture, Geeks have places where they gather for community. We need to find those locations, as we discussed in a previous post. In order to engage culture, we must be where the culture gathers.

This is not our default response as Christians. We want to drag the culture into our own culture and then into the church. Instead, we should be going into the world to engage people with the gospel message. Christ and the apostles didn’t show up and hand out fliers to the next “big church event”; they went to the people and demonstrated the gospel. This, too, is our call. Instead of going to marketplaces, synagogues and the temple as Christ and his followers did, we are called to Comic Book stores, movie theaters, game stores and conventions to engage the Geeks.

Christ didn’t show up & hand out fliers to the next “big church event”; he went to the people.

Once we have taken the steps to engage the culture through learning their language and being part of their community, it’s time to find pathways to demonstrate the gospel realities in coherent ways. Our goal here is to build trust and commonality between people. This takes time, so don’t become frustrated in the process. We are seeking to win hearts and minds through the demonstration of the Kingdom in how we engage the culture and how we act.

We can approach Geek culture in multiple ways, and our approach may depend on which sliver of the Geek culture you choose to engage. Be willing to think outside the box:

For example, we could provide something the culture enjoys:

We could also provide something the culture needs:

The bottom line is that we should think about what the cultural needs and desires, then apply the gospel message in a way that drives conversation rather than condemnation or accusation.  In our efforts to bring the gospel to the Geeks, we need to be constantly engaging the culture by being a part of it where it already exists. How can the church expect to influence a group of people that we do not otherwise understand or already belong to?

Why We Need to Engage Geek Culture Well

At times I fear we lose track of actual people in the process of attempting to share the gospel. We tend to have the appearance of an invading force of outsiders who show up to destroy and assimilate every culture we approach as the church. Sadly, much of the Geek culture perceives us this way.

That said, we would be mistaken to assume that Geek culture can be reduced to these sinful tendencies. Geek culture contains traits which glorify God and those that don’t, just like any culture on earth.

Learning how to engage Geek culture helps us better engage all cultures.

Ultimately, then, learning how to engage Geek culture helps us better engage all cultures. We need to be careful not to pre-judge a culture for its sin without also identifying the parts of that culture that do glorify God. See, God has created in His image every person that makes up a given culture. The fall of humanity and our sin taints God’s creation, but it did not ruin it beyond repair.

Thus our approach to other cultures (including the Geek culture) can be openness to that which brings us together in His glory. We need to be aware of the pitfalls, but we can celebrate the areas where the culture shines brightest: art, creativity, community, fun-loving and much more.  Finding these areas to celebrate allows us to engage in fruitful conversations as people see us no longer as an invading army, but rather as fellows Geeks with something valuable to say.

In part four, we will conclude our adventure on engaging the Geek culture by discussing the ways and means of community. 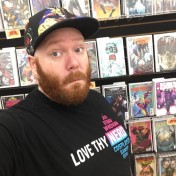